An outline for understanding the book of Revelation and it’s supporting Tanakh (O.T.) scripture.

Understanding Revelation in God’s Timing and the opening of the book of Daniel!

Now is the time in opening up Daniel! For we have found that the end of days is commencing around us. Look around you!

It’s the glory of God to conceal a matter!
And yet it’s a glory for kings to seek it out. Proverbs 25.2

So shall we seek out the truth from God’s word. From the Word of God itself we able to open up the book of Revelation and understand it from a divine structure and logical approach.

The book of Revelation is a clear, logical, and chronological account of events that usher in the return of Yeshua, the judgement of God, and the marriage of the Son of God to His bride for all eternity! It’s the book that opens up the sealed book of Daniel as told by the Lord to the Apostle John.

The book of Revelation and it’s understanding rests on several supports and can be understood only by considering each one of these supports in context within all the supports.

Those supports are as follows!

1.) It’s essential to being Hebraic in nature because it is initially written in Hebrew, by a Hebrew, about Hebraic events and later translated into Greek using “translator’s Greek!”
2.) It’s structural linkage to the menorah (in a compound form) as given in Revelation 1:12-20 are to hang and organized in order that all the group seven events with their accompanying Shamash chapters or sections of text.
A compound form is a menorah with seven mini- menorah’s atop each branch for all seven branches.
3.) It’s conceptual linkage to all the four forms of the Hebraic sub-covenants. Those sub-covenants are Blood/Servant, Salt (friendship), Sandal (inheritance), and the Marriage (sealing of the betrothal) covenants.
4.) It’s conceptual understanding through knowing the ancient process of Hebrew betrothal.
5.) Understanding that John was opening up what God has sealed in the book of Daniel when God was inspiring John to write what He sees as directed from the Holy Spirit!

Now to explain what is meant by Shamash or Shamash chapter(s) in the number #2 of the above list of groups.

The Shamash concept is a Hebrew concept that came from God’s creation of the Menorah because the central part in the middle is known as the Shamash that is considered as the light that lights all the other lamps.

The term Shamash is used as well in describing a central or descriptive chapter or section of text that gives pertinent information and introduces the following subject text or chapters that have its own series of seven events that follow. And each group of seven events, again, have their own introductory or explanatory section that we call Shamash.

What Are those “Shamash” Chapters really?

The seven mini-menorahs represent seven different groups of related events. These seven groups are delineated by the text of Revelation itself. These groups and sections are listed on a MAIN menorah from right-to-left instead of left-to-right.

The seven different groups of related events that are described in Revelation that are organized by seven mini-menorahs within a main menorah ARE for understanding the overall picture and the order of events in the book of Revelation.
Starting from right-to-left those groups are the following, in order, which comprizes both God’s Covenant and the enemy’s counter-covenant.

The main portion of the book of Revelation is organized into seven sections.
Each section has an introductory portion (Shamash) and a portion that describes the seven events that fit onto its corresponding mini-menorah that hangs all seven events of that group [See the groups]. Each of the seven sections of events of Revelation including their introductions (Shamash) will, therefore, require separate chapters or more for each of the sections of seven events described in Revelation.

What I have simply done here is laid out a foundation for studying the book of Revelation in order to understand what comes first and in order. With all this said you might wish to begin (/continue) your own study that you might become familiar with the revelations of God through a Hebrew mindset such as the apostle John’s.

More later… as I continue my discoveries from the scriptures and our Jewish-Christian Rabbis! 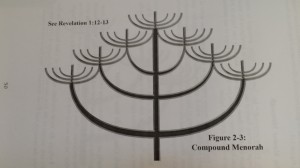 The compound menorah (template) that organizes the seven groupings of the seven events. Revelation 1:12-20. 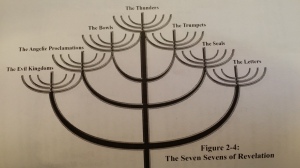 The placement of the seven groups of seven events in order from right to left. 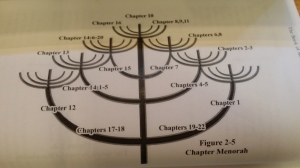 Studying events by chapters/text in their order.